Get Help Starting an Encore Career 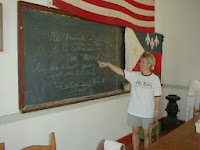 Now that they are reaching retirement age, Baby Boomers are often discovering that they are not quite ready for the rocking chair.  They look at this period of their lives as an opportunity to do the things they always wanted to do when they were younger.  For some, that means travel or pursuing a hobby; for others it may mean doing something meaningful with their lives in the form of a second career.

If you are one of those who is ready to move into a second career, I want to introduce my readers to Encore.org.  It is a website designed specifically for Baby Boomers and others who are searching for a new career in the second half of their lives.

While I only occasionally refer my readers to other websites, Encore.org is so comprehensive and well-done, it would be impossible for me to provide you with all the information they have already put together on this site.

Why You May Want to Have an Encore Career

There are typically two reasons why Baby Boomers choose to start a second career later in life:

With at least 10,000 Baby Boomers turning 65 every single day in the United States, many of them are not financially prepared for retirement.  Having a second career to supplement their Social Security benefits can make a difference in whether they are struggling to survive or really enjoying their senior years.  In addition, people who continue working while collecting Social Security benefits find that their benefits can increase a bit faster than the typical annual cost-of-living increase.

Another reason for second careers is that some adults have spent decades postponing their "dream job" because they needed to stick with better paying jobs while raising their families.  As a result, I know Realtors who want to be artists, engineers who long to work as a chefs, office workers who dream of becoming caterers, and teachers who have been writing a novel for years while waiting to retire.  Other people long to do something meaningful with their lives, but they don't know what opportunities are available and how to get started.

How You Can Find an Encore Career

What should you do if you know you want to work after retirement, either because you need the money or you need the mental stimulation, but you feel as though you are groping in the dark for something that would really excite you?  That is where http://www.encore.org/ can help you get started.

Many of the careers they promote are referred to on their website as careers with purpose.  They even sponsor "Purpose Awards" designed to recognize people who have "moved into second acts for the greater good."  These are people who have committed the second half of their lives to solving significant social problems.  Some of these people have been given cash awards of as much as $100,000 for their extraordinary contributions to society.

When you log onto encore.org, be sure to check out the tab labeled Work.  Under it, you will find information about pursuing the top five encore careers:  health care, green jobs (environment), government jobs (including the Peace Corps), working for non-profit organizations, and educational jobs (such as Troops to Teachers).

From there, the website will give you the information you need to get started on your encore career ... whether that means going back to school, applying to a government agency, or using your current education and experience to fill a job opening at a non-profit organization.

How an Encore Career Can Enrich Your Life

I have a friend who joined the Peace Corps in her early 60's after retiring from her job as head of Information Technology for a newspaper.  Her job with the Peace Corps involved teaching parents and teens in small villages in the former Soviet Union about the dangers of human trafficking.  Unscrupulous people had been going to these villages and offering young women jobs as nannies in Europe and the United States.  Once they were out of the villages, however, these young women were frequently forced into prostitution, instead.  My friend remained in her Peace Corps assignment for two and a half years before she returned to the United States and began her official retirement.  However, even though she is now in her early seventies, she continues to frequently meet with other former Peace Corps members and gives speeches about her experience.  Her encore career continues to define and enrich her life.

By the way, when she joined the Peace Corps, my friend told me that there were a number of other people in their 60's and early 70's who were joining at the same time.  So, if this was something you wanted to do in your early 20's, and didn't have the opportunity, it is not too late!

If you are wondering what you might like to do after you retire from your current career, check out Encore.org.  You may be on the verge of an exciting new adventure!

For those of you looking for additional retirement information, click on the tabs at the top of this page for links to articles about where to retire in the United States or overseas, financial information, dealing with medical issues, and a variety of other topics such as family relations and travel.

You are reading from the blog:  www.baby-boomer-retirement.com

Photo credit of a teacher in a foreign country is courtesy of www.morguefile.com
Posted by Deborah-Diane at 3:00 PM