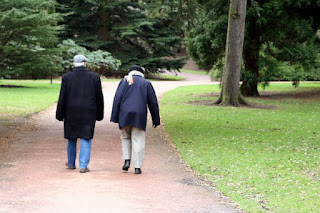 This year my husband and I will celebrate forty-four years of marriage.  We are proud of this accomplishment and have never regretted getting married.  It is a second marriage for him and the only marriage for me.

As we have gotten older, we have noticed that some senior couples who are widowed or divorced are choosing not to get re-married; they are living together, instead.  According to Forbes, in 2006 there were 1.8 million Americans age 50 and older who lived in heterosexual "unmarried-partner households."  This was a 50% increase from 2000 and there is every indication that the trend has continued since then. (http://marriage.about.com/cs/cohabitation/a/cohabseniors.htm).  Why are couples making this decision?

Advantages of Cohabitation for Seniors

Social Security is the major reason that many of our friends have chosen to live together while remaining single.  In some cases, a widow may receive lower benefits if she remarries, especially if she remarries before the age of 60.  If a widow is over the age of 62 and receiving survivor's benefits, she can still collect benefits based on her former husband's income, if she remarries.

Even if Social Security does not present a problem, there are other financial reasons why a couple may decide not to marry.  For example, a divorcee may lose her alimony if she remarries. There are sometimes other pensions which may also be reduced or eliminated if a person remarries.

Being married could also have tax consequences for certain couples.

In other cases, the individuals may want to keep their assets or debts separate, or protect their credit rating, especially if one person has been through bankruptcy or a foreclosure.

Seniors with adult children may be concerned about leaving their assets to their heirs.  In fact, in some cases adult children have been known to oppose having a parent remarry because they fear they will lose their inheritance.  We've all heard stories about the "gold-diggers" who marry wealthy retirees.  People are frequently suspicious no matter how compatible and happy the two people are.

Disadvantages of Cohabitation for Seniors

Living together can sometimes create legal problems for the couples.  In fact, if you do decide to live together rather than get married, it is probably a good idea to meet with an attorney and create a cohabitation agreement.

For example, if one person owns the home and it is being left to the children, the survivor may have to move out upon the death of their partner.  If both of you have been making payments on the property, this can cause resentments and financial hardship.

In addition, cohabiting seniors can face some of the same legal problems that were experienced by cohabiting gay couples, prior to the legalizing of gay marriage, such as the inability to make healthcare decisions for their partner.

If you do decide to live together rather than get married, you may still want to have a commitment ceremony.  You can write your own vows and ask a friend or relative to preside over your ceremony.  A friend of mine told me that some people are even having religious ceremonies that are recognized by their faith, but are not legally recorded.  I do not have independent knowledge of this, but it is something that religious couples may want to investigate.  However you plan your ceremony, this is a nice way to seal your relationship without putting yourself into a legally binding contract.

As mentioned above, it is probably a good idea to see an attorney about having a cohabitation agreement written up that will protect the assets and property rights of both of you.  This document can set forth the legal expectations of both parties.  In this way, you may be able to take advantage of the benefits of cohabitation while minimizing the disadvantages.  Some items that you may want to include are how long the survivor can remain in a home after the death of their partner, and who has the authority to implement a living will.  Any other financial or legal concerns you have can be addressed in the same document.

If you are looking for more retirement information, use the tabs or pull down menu at the top of this page to find links to hundreds of additional articles on where to retire in the United States or other countries, financial planning, medical issues and changing family values.

You may also want to read:

Photo of couple courtesy of www.morguefile.com
Posted by Deborah-Diane at 4:40 PM