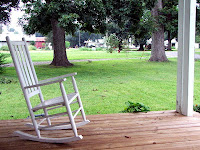 In 2012, I ran across an interesting news story from Bankrate, Inc., entitled "10 Worst States to Live in During Retirement."  Their list included a large part of the southern United States.  Of course, this is in direct conflict with many of my other posts in this blog in which I published lists of wonderful places to retire that had been created by CNN Money, Kiplinger Magazine, and AARP.  All of their lists had promoted many of the southern states as affordable, sunny places to retire.

Is the South Really a Bad Region for Retirement?

The Bankrate article peaked my interest because, like most of you, I wanted to know their criteria.  Why were these states suddenly considered undesirable?  Bankrate based their information on statewide statistics for short life expectancies, high crime rates, and high poverty levels. As I thought about these statewide statistics, I realized that their criteria might not have much affect on many of the people who choose to retire in the South.  Here are my thoughts:

First, your personal life expectancy is determined by your health, your heredity and your lifestyle.  The statewide average life expectancy will not have much affect on you, especially after you have already reached the age of 60 or older.

Second, no one wants to live in a state with a high crime rate.  However, not every town in these states has an abnormally high crime rate.  In addition, if you live in an over-55 community or an assisted living facility, your home or apartment is likely to have a very low crime rate.

Third, one reason many of these states are attractive to retirees is because they often have a low cost of living.  While a large number of retirees who live in these states may have incomes below the poverty line, the amount of Social Security you receive is not based on the state where you live.  You are likely to live on Social Security much more comfortably in an affordable state like Louisiana or Georgia than an expensive state like New York or California.  In fact, the low cost of living in these states may be the very reason why so many low income retirees have chosen to live in them, and the reason why there are so many retirees in these states with incomes below the poverty line!

Keeping these thoughts in mind, here is the Bankrate list:

(Life expectancies are listed after each state)

The percent of retirees living in poverty in these states ranged from 9.7% (Tennessee) to 12% (New Mexico).

How Can Texas Be Considered a Bad State for Retirement?

In looking over the statistics for the various states, I particularly objected to Bankrate's inclusion of Texas on their list.  After all, the life expectancy in Texas was 78.3 (the highest on their list),  The state crime rate of 4,233 per 100,000 residents was high, but it is not that high everywhere in the state.  Many small Texas towns and suburbs have a low crime rate.  The poverty rate of  retirees at 10.7% might only reflect that many low income retirees find it a desirable place to live.  Texas has shown up over and over again on the lists of other organizations as a great place to retire.

These statistics show that we have to evaluate everything we read carefully.  Making decisions about retirement is confusing enough, without having to wade through conflicting opinions!

If you are interested in more ideas about where to retire in the U.S. and abroad, financial issues, medical concerns and changing family relationships, use the tabs or pull down menu at the top of the page to find links to hundreds of helpful articles.

Photo courtesy of morguefile.com
Posted by Deborah-Diane at 10:03 AM