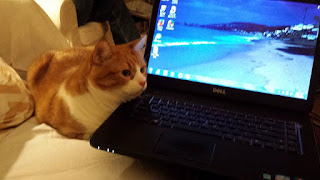 Many younger adults have the impression that people over the age of 65 are clueless and incompetent when it comes to using technology. However, although that may be true for the most elderly seniors, many members of the Baby Boomer generation are either still in the workforce or they have just retired in the past few years.  Consequently, they are more comfortable with modern technology than their children and grandchildren may realize.

As a Baby Boomer myself, nearly everyone I know has a smartphone, a computer, and access to the internet. The majority of my friends are also active on social media, at the very least using Facebook.  In fact, according to surveys, over 80% of Baby Boomers are on at least one form of Social Media, primarily on Facebook. About 13% of Baby Boomers use LinkedIn; 5% use Twitter and 1% use Instagram.  Women tend to post more frequently than men.  Baby Boomers are also more likely than their younger relatives to share political content. *

While Baby Boomers are often lumped in with older seniors in their 80s and 90s by younger generations, it is the Baby Boomer generation which is primarily responsible for the rapid increase in the use of technology by senior citizens. According to a report by the Pew Research Center, smartphone use among Americans over the age of 65 has quadrupled since 201l.  Most of these smartphone users are Baby Boomers, with their numbers growing daily.

Below are some additional interesting statistics about people over the age of 65 and their use of technology.

Senior Citizens over age 65 and the Technology They Use

Remember, the statistics below include all older people, including those in their late 60s, 70s, 80s, 90s and those over 100, not just the Baby Boomers, who are currently under 75. As a result, the fact that so many seniors in general are using the internet and smartphones is quite impressive.  These statistics are from the Pew Research Center.

For ALL Seniors over the age of 65:

AARP Survey of Smartphone Use by All Seniors

AARP has also surveyed their members, and this is what they found:

Of the 42% of people over the age of 65 who own a smartphone, nearly all of them are sophisticated enough to use it for more than just making phone calls.

89% use it to send and receive emails or text messages

77% get traffic information and directions

42% play games on their smartphone

34% watch videos or shows on it

28% use their smartphone to manage their medical care (for example, getting lab results, messaging their doctors, or ordering prescriptions)

Personally, I have noticed that many of the women I know also use their smartphones to take photos and videos, especially of their grandchildren and their trips, and share them with their friends. I rarely attend any casual social function where women are not passing their phones around, showing off their latest family photos!

According to the same surveys mentioned above, when making a purchase, 79% of senior citizens regularly use a computer; 35% are also comfortable using a cell phone to make purchases.

When looking online for discounts or deals, 61% do their research on a computer; 37% will turn to their smartphone.

When doing their banking or other financial transactions, 79% turn to their computer and 35% are willing to use a smartphone.

Among the people I know, the ability to do online banking from home, transfer money between accounts, and deposit checks electronically has been a tremendous help to people who no longer drive or who just do not want to go out in bad weather.  Shopping online has also made it much easier for seniors to buy gifts, have them wrapped, and mailed directly to family members.  In addition to gifts, some seniors are using their computers and smartphones to order groceries or have meals delivered to their homes. This has greatly benefited seniors who find it difficult to get out and go shopping.

Seniors have a Positive Attitude about Technology

Having a positive attitude about technology is important, because it is likely that the ability to use a computer and smartphone will be even more important in the future, when these devices could become the major way most of us contact our doctor, pay our bills, manage our finances, order our medications and groceries, or perform other aspects of daily living.

Generation X Will be Also Start Retiring in the Coming Decade

Most of the above statistics reflect the impact of  the10,000 Baby Boomers who are reaching age 65 every single day in the United States.  Because of their experiences in the work force, they are bringing their comfort with technology into retirement with them.

Over the next ten years, the Baby Boomers will be followed by Generation X.  This age group was born between 1965 and 1980, which means the oldest of them will begin turning 55 in 2020 and and could start moving into retirement communities, joining the Baby Boomers and older generations in these neighborhoods.   As Generation X ages, the percentage of seniors using the most advanced technology will continue to increase.

In my own retirement community, I recently overheard two men chatting at the gym, complaining that they didn't like the music and activities offered by the Baby Boomers Club and they thought they should start a Generation X club!   Progress continues to march on!

If you are retired or a Baby Boomer and would like to share your personal experiences with technology, please share them in the comments section below.

If you are interested in learning more about aging, retirement planning, common medical issues as you age, Medicare, Social Security, and more, use the tabs or pull-down menu at the top of the page to find links to hundreds of additional articles.

* Sources for statistics about Social Media usage:   https://medium.com/@LiquidLockMedia/12-outstanding-statistics-on-baby-boomers-and-social-media-2be6c49b5b91  and from:  Pew Research Center as reported by AARP in their publications in 2019.

Photo credit:  Photo taken by author
Posted by Deborah-Diane at 8:41 AM