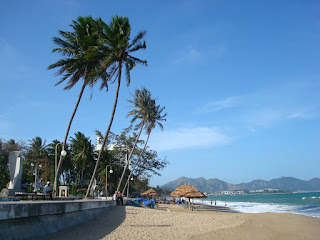 During the 1960s and 1970s, when many Baby Boomers were engaged in fighting a war in Vietnam, it is unlikely that most of them ever considered the possibility they would be returning in 50 or 60 years to retire to a tropical, beachside community in that country.  However, that is exactly what has been quietly happening over the past few years.  Where do they live in the country, and what is the appeal?

The Beautiful Bay at Nha Trang

While some people have moved to modern cities such as Da Nang and Ho Chi Minh City, one of the more popular locations for American ex-patriots is Nha Trang.  Today it is a gorgeous seaside resort town along the edge of one of the most beautiful bays in the world.  The beach is 5.6 miles long and features jogging trails, paved footpaths, sculpture parks and lovely landscaping.

If you are remembering the Vietnam of the 1960s and early 1970s, then you will be stunned by how much has changed over the past five decades.  For example, the beach at Nha Trang is lined with modern high-rise hotels and resorts, spas, seafood restaurants and casual bars and cafes.  The photo below shows a modern Sheraton Hotel and Spa in Nha Trang. 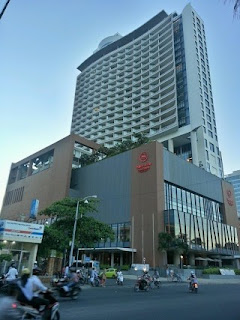 There are major supermarkets where you can shop for a variety of food items, including some which are imported, as well as traditional neighborhood markets for local food.

Speaking of food, French-style baguettes are baked fresh daily in virtually every village in Vietnam. Street vendors sell them stuffed with omelettes or pate for less than one American dollar.  In addition, you can find Italian restaurants, pizza, Texas BBQ, neighborhood bars and other American favorites in Nha Trang.  There is no reason to change your lifestyle dramatically, even while living thousands of miles away.

Americans have vacationed there for so many years, that most of the locals speak English well, and they are friendly towards Americans.

Another pleasing feature in this part of Vietnam is the climate.  The average year-around temperature is 79 F.  It is rare for the highs to fall below 68 F or the highs to be above 90 F.  It is a little cooler in the winter (November through February) and warmer in the summer, although the sea breezes keep you comfortable.

The top hospitals in Vietnam are in Ho Chi Minh City, about an hour flight from Nha Trang, but new facilities have also recently opened in this beachside community.  The staff at the local hospital even speaks English.

According to "International Living Magazine," a couple can live in a nice, Western-style house or apartment near the beach, have a housekeeper once or twice a week, eat out every day, and go to a spa once in a while for about $850 a month.  That is well within the means of millions of Americans on Social Security!

What You Should Know Before Moving Overseas

Readers will find other helpful articles in this blog about moving abroad.  There are a few things you should know.  You can have your Social Security deposited directly into bank accounts in most countries around the world, and as many as 600,000 American retirees are living abroad.

You cannot use your Medicare in foreign countries.  Some countries allow you to buy into their national health insurance plan.  Others have such affordable healthcare that retirees find they can pay out-of-pocket.  Some retirees continue to subscribe to Medicare, which they can use when they return to the U.S. to visit family and friends.  You may wish to speak with your insurance agent to explore a variety of choices.

We strongly suggest that whenever you are overseas, you should follow the State Department website and watch for warnings and alerts which could affect you.  Things can change, even after you move abroad, so you want to stay informed.

Crime is another problem which could be a concern for retirees in Vietnam.  My manicurist is Vietnamese and immigrated to the United States in 2011.  She said they moved to the United States because they were robbed several times in Vietnam.  I asked if she wanted to go back someday, but she told me she no longer knows anyone there and has no desire to return.  The high crime rate should be taken into consideration and weighed against the beauty and low cost-of-living in the country.

Before moving to a foreign country, we always recommend you visit the area on vacation and speak to a local attorney, real estate agent, and CPA, so you know if you will be allowed to purchase property, work in your new country, and any other tax or legal issues which could affect you.

If you are interested in learning more about where you should retire in the US and abroad, financial planning, common medical problems as you age, Social Security and Medicare, use the tabs or pull down menu at the top of the page to find links to hundreds of additional helpful articles.