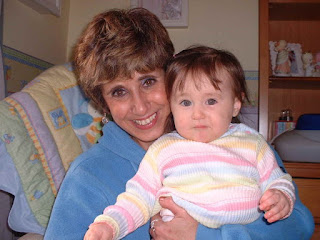 Like millions of other couples in the U.S., the man and his wife who handle our taxes are also raising one of their granddaughters.  A widow in my book club raised two of her grandchildren until they finished college.  Several other retired people we know have raised their grandchildren for at least part of their childhood.  Unfortunately, this issue creates a number of problems for senior citizens, including where to live.

Journalist Leslie Stahl, from 60 Minutes, addressed some of the problems involved in raising grandchildren in her book Becoming Grandma: The Joys and Science of the New Grandparenting

and in an article she wrote for the website Next Avenue called  "A Place to Live for Grandparents Raising Grandchildren."

Millions of Grandparents are Raising their Grandchildren

According to Ms. Stahl, there are almost 3,000,000 grandparents in the U.S. who have legal custody of some or all of their grandchildren.  Approximately 18 percent of these families live below the poverty line.  They face a number of issues, including where to live.

It is against federal law for children under the age of 18 to live with parents or grandparents in an age-restricted over-55 retirement community, a Continuing Care Retirement Community (CCRC) or other type of senior facility.  Children are also not allowed in low-income housing for the elderly or in senior apartment complexes.  As a result, grandparents who make the tough decision to raise their grandchildren are often forced to move, sometimes into situations which are not safe for them or their grandchildren and which are not well-designed for the elderly.

The sole exception to the lack of housing for grandparents who are raising their grandchildren is the Grandparent Family Apartment Complex which is located in the Bronx in New York.  The complex was build in 2004.  According to Leslie Stahl, it is the only complex of its type in the United States, although there is unquestionably a need across the country.  In addition to providing affordable housing, the complex offers different types of support to the grandparents and children, including transportation, legal services, mental health services, after school care, tutoring, support groups and parenting classes.  These programs at the Grandparent Family Apartment Complex seem to be making a significant difference in the lives of the children.  Their high school graduation rate exceeds that of the surrounding community.

Why Grandparents are Raising their Grandchildren

There are many reasons why grandparents feel compelled to take over the custody of their grandchildren.  The children's parents may have died in an auto accident or from diseases.  In some cases, the parents may not be equipped to properly take care of their children because of mental illness, abusiveness, addiction, or alcoholism.  In other situations, the parents may be deployed with the military or could be in jail. Sometimes the problem is a teen pregnancy and the grandparents decide to continue raising both their child and their grandchild.  Whatever the cause, grandparents who have already raised their own children often find themselves starting over again with their grandchildren.

While their options are limited, there are a few things grandparents can do to make the situation easier for both them and their grandchildren.

More affluent grandparents, of course, have more options about where to live.  They may be able to remain in the family home where they raised their own children or move into a similar community.  Younger grandparents who are still in good physical condition may be able to continue to hold down a job and raise their grandchildren.

Low-income grandparents also have a few resources available to them.  For example, they can apply to receive Section 8 housing vouchers or to move into low-income family apartments.

In some states, the grandparents may want to ask their Social Services department if they qualify to become legal foster parents for their grandchildren. They will have to go through an application process and background check, but it could be worth the effort.  If the grandparents are appointed foster parents, they will qualify for financial assistance which could make it easier for them to afford to provide their grandchildren with better care.  If a grandparent is living solely on Social Security, this additional financial assistance could be the only way they can afford to feed, clothe, house and care for their grandchildren.

The grandparents may also want to go to their local Social Services department to see if they qualify for SNAP (food stamps) or other types of public assistance.

Other Considerations for Grandparents Raising Grandchildren

If you decide you are the best person in your family to raise your grandchildren, there are other issues you may want to consider when choosing a place to live:

School system - You may want to check a site like greatschools.com to decide which school would be the best for your grandchild. Once you pick a school, plan to get involved.  Join the PTA and take any of the parenting classes they offer.  You may believe you know everything you need to know, since you already raised a family.  However, connecting with other parents and learning a few new ideas could make life easier for both you and your grandchild.

Friends and Relatives - We all need someone to back us up once in a while.  You may want to move close to other relatives or friends who would be able to babysit occasionally or even step in and take care of the children for a few days or weeks if you need to go into the hospital or just come down with the flu.

Other Support Systems - Consider becoming involved in a neighborhood church, synagogue, mosque or temple.  Most of them will have youth activities which can provide a positive environment for your grandchildren.  You may also investigate other neighborhood support systems such as after-school programs, pre-schools, sports teams, Scouts, Big Brothers or Sisters, and the YMCA. Welcome all the help you can get while raising a grandchild.

Medical care - Seek out a caring family doctor or pediatrician, as well as a dentist. These medical caregivers can help you keep your grandchildren healthy.

Preparing for retirement is complicated enough if you only have to worry about yourself.  If you are also caring for grandchildren, it becomes even more complex.  Make sure you take advantage of all the help you can get.

Looking for help in planning your own retirement?  Watch for my book, Retirement Awareness, which is scheduled to be released by Griffin Publishing in 2018.

Want more information on where to retire, common health issues, financial planning, Social Security, Medicare and more? Use the tabs or pull down menu at the top of the page to find links to hundreds of other articles.