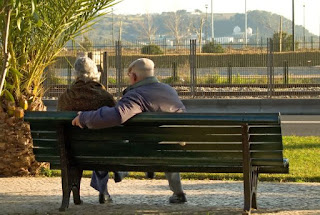 The Population Reference Bureau, which searches for population trends around the world for a variety of populations including the aged, children, and minorities, has a very interesting brochure which can be downloaded from their website.  It contains fascinating statistics about how and where the population of the United States is aging.  It is called Aging in America and you will find a link to it at the end of this article.

The twenty page brochure contains charts, statistics and far more information than I could possibly fit into a blog post.  However, I thought I would summarize some of the more fascinating facts here.

*   Japan, Italy, Germany and the United Kingdom are aging at even a faster pace than the population of the United States.  Aging is also accelerating in other countries, including Russia, China, Brazil, India and Mexico, and is becoming a global phenomena.  As life expectancy grows longer and birth rates drop, the world's population will continue to age.

*  The racial make-up of this country is also changing.  In California, New Mexico and Hawaii, non-Hispanic whites now make up less than half the population of those states.  Typical Caucasian, non-Hispanic whites will be a minority nationally by 2041.  In the near future, there will no longer be a single racial majority nationwide.  The labor force at that time be made up primarily of Hispanic, Asian and multi-racial workers, while the aging Baby Boomer population consists primarily of non-Hispanic whites.  Will this knowledge encourage the non-Hispanic whites in positions of power in our government to adopt policies that provide greater access to education and jobs for those minorities who will soon be running this country?  After all, in the future those Hispanic, Asian and multi-racial workers will be the ones to support and take care of the aging Baby Boomers.

*  The aging population is not spread out evenly across the country, but is heavier in certain pockets.  For example, in the Midwest and Northeast, the population is aging faster because many of the young people are moving away and older residents are aging in place, remaining in their familiar communities.

*  On the other hand, when people do choose to relocate, they are moving in large numbers to certain retirement destinations, bringing a higher than average number of senior citizens to those regions.  Among the retirement destinations that are heavily impacted are Florida, Arizona and Nevada.  In addition, many retirees are choosing to move to or remain in small towns and rural areas, which will increase the demand in those areas for senior housing, public transportation, health care and retail businesses.

*  According to the Index for the Well Being of Older Populations, the best countries for those 65 and older are Denmark, Netherlands, Switzerland and the United States.  Our goal should be to make sure we remain near the top of the list in the coming decades.

There is a great deal of additional fascinating demographic information about our aging population in this brochure.  It is well worth reading ... as are other brochures that are available from the Population Reference Bureau.

To read the full brochure for yourself, you can download it at:  America's Aging Population from the Population Reference Bureau at PRB.org - Volume 66, No. 1.

If you are looking for additional information about aging and retirement, use the tabs or pull down menu at the top of the page to find links to hundreds of articles about where to retire in the United States and overseas, health issues, financial planning and more.