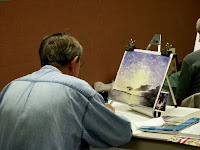 Are you planning a picture perfect retirement?  Do you dream of spending your Golden Years with paint brush, fishing pole or golf clubs in hand?  Although undoubtedly the day will come when you will have to stop working, whether you want to or not, your financial well-being may not be as comfortable as you had hoped.

According to Yahoo!Finance, in an article from U.S.News entitled "8 Scary Retirement Facts," the 2007 decline in the economy caused havoc for the retirement plans of substantial numbers of aging Baby Boomers.  Sadly enough, their financial problems may be even more severe because our life expectancy continues to climb, even as their savings dwindle.

Scary Facts About Retirement for the Baby Boomer Generation

Here are a few facts from the U.S.News article that you may want to consider as you work on your retirement nest egg:

1.  Today, one in six senior citizens is living below the poverty line, which is $22,350 for a family of four, and even less for a single person.

3.  The number of senior citizens will more than double from 40 million to 89 million by 2050.  This will put a huge strain on the economy.

4.  Right now, the median cost of an assisted living facility is $3,300 a month.  In California, where I live, I have read estimates of $6,000 a month.  In Alaska, it is $6,813 a month.  Today, assisted living is not affordable for people who are living solely on Social Security.  This will become an even greater problem as we Baby Boomers age.  While Medicaid is often the payer of this expense for many low and moderate income retirees, this is one more burden that will be placed on the government and working adults.  Those who do not qualify for Medicaid will have to pay these costs out-of-pocket.

5.  The economic losses of a few years has already taken a toll on people who are age 55 and older.  This age group accounts for approximately 20% of all bankruptcies, often because of medical expenses.  Surprisingly, older Americans also have more credit card debt than younger adults.

6.  Baby Boomers will need to have more savings in the future than ever, just to survive during their retirement years.  For many people, their lack of savings will mean they will need to work much later in life than they had planned.  This will not be easy for the numerous Baby Boomers who lost their jobs during the recession, often forcing them to take their Social Security benefits earlier than they had planned.

7.  While some Baby Boomers do know that we need to save more, it appears that the message is not getting through to many Americans.  According to a 2009 Career Builder survey, over one-third of Americans admitted that they do not contribute to retirement accounts.

8.  Age discrimination continues to make it hard for senior citizens to find and keep jobs.

All this information may seem discouraging.  However, it is meant to be more of a warning to those who want to make sure they have done everything possible to prepare for their retirement.  Preparing for retirement certainly brings to mind the old saying, "Hope for the best and prepare for the worst!"  The better prepared we are, the more likely we will manage to have a comfortable retirement when the time comes.

If you are looking for information about financial planning, where to retire, medical concerns and changing family relationships, use the tabs or pull down menu at the top of this article to find links to hundreds of additional articles.

Photo courtesy of morguefile.com/
Posted by Deborah-Diane at 9:06 PM