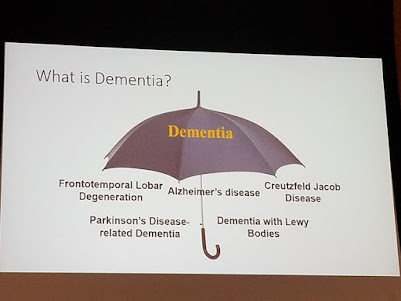 Have we Baby Boomers been careless about the way we are aging?  There seems to be some indication of this, based on what researchers are seeing with our mental decline. There are indications that our cognitive function is not as good as it was for our parents and grandparents at the same age! The good news is that it is not too late for most of us to make the necessary changes to protect our brains from declining too fast.
As the attached graphic from the University of California in Irvine shows, dementia is an "umbrella term" which covers many types of cognitive decline,  with Alzheimer's Disease being the most common.  However, it also includes dementia which is caused by Parkinson's Disease, Lewy Bodies, Vascular problems, brain damage and many other pathologies. With everything we know today about dementia, how is it that Baby Boomers are seeing more cognitive decline at an earlier age than earlier generations?

What is it that researchers have discovered, and what can we do to avoid being one of the Baby Boomers who will prematurely develop dementia?

According to a study called "Health and Retirement" which appeared in the Journals of Gerontology, the University of Michigan followed a group of 30,191 people from 1996 to 2014.  This was a sizeable and lengthy study.  People born between 1942 and 1947 had better cognitive function than those born between 1890 and 1923. However, Baby Boomers, who were born after 1947, had significantly worse cognitive functioning than either of the preceding two generations.

Some of the Baby Boomers they studied showed signs of cognitive decline as early as ages 50 to 54.  The participants were given standard cognitive tests which included memorizing lists of words and counting backwards from 100 by sevens.  Older senior citizens were able, as a group, to perform these tasks better than Baby Boomers, when their scores were compared at the same age.

The author of the study was Hui Zheng, an associate professor at Ohio State University. Although the study was not able to completely ascertain all the reasons for the rapid cognitive decline in Baby Boomers, they were able to get some indications from their research.  When compared with older generations, they found that Baby Boomers, as a group, had lower household wealth, were less likely to be married as they aged, were lonelier, and exhibited more depression and psychiatric problems.

In addition, the physical health of many Baby Boomers was not as good as the overall health of their older relatives at the same age.  Baby Boomers were more likely to be obese, physically inactive, and suffer from diabetes or other chronic illnesses.

One cause of dementia is head trauma, and many Baby Boomers have engaged in more aggressive sports and other activities which exposed them to concussions and falls.  Baby Boomers should avoid risky activities that could lead to brain injury, as a way to reduce their risk of developing injury related dementia.

In addition to the research done at Ohio State University, and other study centers, researchers from the University of California - Irvine have also studied the causes of dementia and they have found that, although there are some factors which people cannot change, there are others which are well within our control.  Among those which are unavoidable are genetics, such as a family history of dementia. We cannot change our parents.  However, there are steps we can all take to reduce our dementia risk, even if we have a family history of Alzheimer's or similar diseases.

The good news is that many of the factors which contribute to early dementia are in our control.  We can make lifestyle changes which slow down the signs of cognitive decline and can improve our mental functioning.  Although not all dementia can be completely prevented, there are signs that people are able to slow it down, often by years, even when family members have a genetic predisposition.  Simply giving ourselves a few more years of clear thinking is something we should all strive to do.

If you are serious about taking steps to protect your aging brain, a good place to start is by reading  "The End of Alzheimer's Program: The First Protocol to Enhance Cognition and Reverse Decline at Any Age." (Ad)

How to Slow Down Dementia 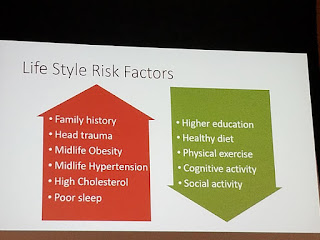 According to researchers at the University of California in Irvine, certain behaviors tend to speed up dementia, and other behaviors tend to slow it down. They have been studying the "Oldest of the Old" for over 50 years in the California retirement community where I live.  Some of their results have been presented on the television show "60 Minutes." The researchers have tested their participants, followed up with them annually for decades, and even dissected the brains of some of the participants after they died.  In their research, they have learned that the more lifestyle changes we make, the more likely it is that we will be able to postpone dementia.

As you can see from the attached chart of Life Style Risk Factors from UCI, here are some of the actions which seem to slow down the development of dementia:

* Education: The more education we have, the lower our dementia risk.  It is never too late to continue to take classes and learn. Do not worry about whether or not you have an advanced degree.  Taking classes in anything which interests you or that improves your job skills is a good way to strengthen the connections in your brain.  You may also want to take foreign language classes, music lessons, or writing classes, even if you are already in your 70s or older.

*  Diet: Eat a healthy, balanced diet which includes adequate protein and a variety of fruits and vegetables, as well as healthy oils such as olive oil, avocados and nuts.  Often referred to as the Mind Diet, you can learn more details on how to follow it by reading "Mind Diet for Beginners: 85 Recipes and a 7-Day Kickstart Plan to Boost Your Brain Health."  (Ad)

*  Exercise: Get daily physical exercise.  At least 30 minutes a day of walking and/or weight training is recommended.  If arthritis or other problems make this difficult, try water aerobics.  It is important to move every day.  It will increase the blood flow to the brain.

*  Brain activities: Stimulate your brain with a variety of cognitive activities, including playing games, working puzzles, etc.  Try to do different types of brain activities, especially ones which you find challenging. As you learn to do new things, your brain will also make new connections.

*  Social activity:  Many people, especially those who are isolated, do not realize how important it is to socialize with others on a regular basis.  Having a conversation is a complex process and people who engage with other people regularly are more likely to keep their brains sharp.  After the pandemic, when people were more isolated than normal, it became especially important for people to look for ways to socialize with family and friends as often as possible.  If you cannot get out of the house to see people, try having phone conversations or Zoom meetings as often as possible. What is most important is that you are actually engaged in these conversations, and not distracted.  You need to practice listening to what is said, and then responding appropriately in a way that invites them to respond.  This "conversational ping-pong" is one of the best ways to keep your brain sharp.

*  Get Necessary Medical Care:  It is much harder to stay engaged in conversation, take classes, get exercise, or do other brain stimulating activities if you are not taking care of your health and, most importantly, your hearing.  People who need hearing aides and do not get them are more likely to develop dementia.  Some researchers have also learned that people who have had Covid-19 may be more likely to develop dementia, which is one more reason to get vaccinated and take other precautions. You want to follow your doctor's recommendations regarding your cardiovascular health, as well.  A stroke, aneurysm, or serious heart attack can do significant damage to your brain. People who are sedentary because they do not feel well or experience pain are also more likely to develop dementia.  See your doctor and get medical treatment for any health problems you may be experiencing.  The better your overall health, the stronger your brain will be, too.

You can learn more ways to maintain your brain health in "The End of Alzheimer's Program: The First Protocol to Enhance Cognition and Reverse Decline at Any Age." (Ad)

Enjoyed this post? Never miss out on future posts by following us.  You will receive a weekly email with the most current post.

If you are interested in learning more about common medical issues as you age, Social Security, Medicare, where to retire, financial planning, travel and more, use the tabs or pull down menu at the top of the page to find links to hundreds of additional helpful articles.

Posted by Deborah-Diane at 2:00 PM