Join the Peace Corps - You Can Start Late in Life! 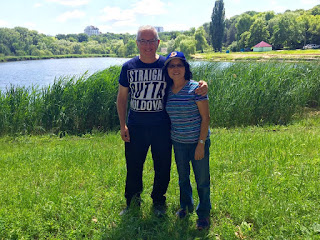 Many older American remember the Peace Corp as an activity which may have been popular with some of their friends after they graduated from college in the 1960s and 1970s.  What they may not realize is that people can actually join the Peace Corp at almost any age, including after they retire.  In fact, with a lifetime of experience behind you, you may have more to offer the Peace Corp than you realize.  This month our guest poster is someone who is sharing the experience he and his wife had when they joined the Peace Corp later in life.  Their book was just released and it is well worth reading.

David and Champa Jarmul (pictured above) served in Moldova, a small former Soviet state that is Europe’s poorest nation.  Enjoy reading about their experiences in their guest post, an excerpt from his book, below:

Life in the Peace Corp - The Story of One Couple

Hundreds of older Americans volunteer every year to serve overseas with the Peace Corps. David Jarmul and his wife, Champa, were among them.  Recently, the Peace Corps evacuated its volunteers worldwide because of the coronavirus, but expects to restore operations after the pandemic ends.

In a new book, Not Exactly Retired: A Life-Changing Journey on the Road and in the Peace Corps, (Ad) David describes how they traveled across the United States and Nepal and then served as Peace Corps Volunteers in the Republic of Moldova, a small former Soviet state that is the poorest nation in Europe.

In this adapted excerpt from the book. David describes the complicated process of disengaging from their conventional American lives to prepare for their big adventure. He says the transition would end up changing their lives — for the better.

When I first served as a Peace Corps volunteer in 1977 at the age of twenty-four, I completed the application, packed a suitcase and backpack, ate a farewell dinner with my family, and headed off for Nepal. This time, the process was a lot more complicated.

The application itself was straightforward, but the subsequent clearances took months. Champa and I submitted resumes with details about everywhere we’d ever lived and worked. We provided references. We went to a courthouse to be fingerprinted. Most important, even though we were in good shape for people our age, we spent months working our way through the medical process. We received thorough exams from our physicians and dentist, updated our vaccinations, and filled out more than 40 forms, some of them several pages long. I scanned and uploaded everything to the Peace Corps along with electronic copies of our dental X-rays, eyeglass prescriptions, and the like.

The medical office ended up approving us but restricting where we could serve. Only a few countries matched both our medical and job needs. Several of them were in Eastern Europe, where the Peace Corps had expanded following the dissolution of the Soviet Union. We ended up designating Macedonia and Moldova as our top choices, although we also said we were willing to serve anywhere. When the Peace Corps eventually sent us invitations to serve in Moldova, we said yes, even though we knew almost nothing about the country.

We did so only after speaking with both of our sons and daughters-in-law, making sure we had their support to leave for more than two years. Like many Americans in their thirties, they were all busy with their careers, small children, and other demands. Now their kids would be losing two of their grandparents for an extended period. Our younger son and his family lived near us in Durham, so they would feel the impact the most. No longer would Champa and I be cheering at soccer games, making dinners, or taking care of the boys when they were sick. Nor would we see our older son’s four daughters in Philadelphia.

Once in Moldova, we would talk with all of them online, but we knew that would be a poor substitute for giving them real hugs. Indeed, throughout our service, we kept telling ourselves we were doing something they might appreciate when they got older, but the truth was we missed them and talked about them every day. For both of us, it would be the hardest thing about being away.

Champa and I debated what to do with our home in Durham. We’d paid off our mortgage a year earlier after accelerating our monthly payments for several years. With our two sons gone, the house was now too big for us. I wanted to sell it and be done with it before we left. Champa wanted to keep it to return home to after our service even if we ended up selling it later. That’s what we ended up doing, hoping to earn some rental income and perhaps see the house appreciate in value while we were away.

Neither of us thought much about what turned out to be another benefit of keeping it, which was that we were able to store possessions in a small upstairs room and in the attic instead of having to rent an expensive storage facility. We also stayed in the house, which was temporarily empty until a new tenant moved in, when we came home for a vacation after our first year as volunteers. Best of all, we had a place waiting for us when we completed our service two years later.

Champa turned out to be right (hardly the first time).

During the weeks before our departure, we worked our way through a long “to do” list. I canceled our gym memberships, forwarded our mail, and arranged to shut off our electricity, gas, water, and cable service. I notified our bank and credit card companies about our travel plans and ordered an additional card from a company that offered free foreign ATM withdrawals. I added my sister to our checking account and notarized a form giving her our power of attorney. I reviewed our wills and made electronic copies of recent tax returns, so I would have them with me when I filed future returns from Moldova. I suspended our medical insurance, canceled the EZ-Pass for my car, and ended our subscription to Netflix. I scoured our credit card bills to make sure I wasn’t overlooking any other recurring charges. Since North Carolina was likely to be a battleground state in the 2016 election, we also made sure to order absentee ballots.

We hired a small Durham company to manage our home for two years. With their assistance, we hired painters and a handyman to spruce up the house before the first tenants moved in. Parents of a friend offered to take care of our dog, Bailey, for which we were grateful. We bought Champa her own laptop.

We used a Peace Corps discount to buy suitcases and a solar-powered flashlight. We bought shoes to walk on Moldova’s muddy roads, boots to survive its winters, and a winter coat for me, overlooking that we would first confront a hot Moldovan summer. I bought spare cables for our electronic gear, converter plugs to charge everything from Moldovan outlets, and a Kindle to load with books. Slowly but surely, we worked our way through the “suggested packing list” from the Peace Corps, wondering how we would fit everything into the two 50-pound suitcases and one carry-on bag we were each allowed to bring.

Simultaneously, we downsized and purged 36 years of possessions from our house. We donated most of our furniture to Habitat for Humanity, hundreds of books to the Durham library, and dozens of bags of clothing and household goods to local charities. I visited the local Goodwill donation center so often that I felt like asking for a personal parking space. We sold Champa’s aging Toyota Corolla to a friend and gave my newer Ford Fusion to my son and daughter-in-law, whose car was dying.

On our last night home, Champa and I slept on an inflatable mattress in our empty house, deflating it in the morning and placing it with our coffee cups and two plates in one of the few empty spaces remaining in the storage room. As we locked the door, we knew we were saying farewell to life as we’d known it, perhaps forever.

"Not Exactly Retired: A Life-Changing Journey on the Road and in the Peace Corps" is available as both a paperback and an e-book through the book website, (Ad) on Amazon, and elsewhere. Author David Jarmul is a writer, blogger and traveler who was previously the head of news and communications at Duke University.

If you are interested in learning more about financial planning, Social Security, Medicare, where to retire, common medical issues as you age, travel and more, use the tabs or pull down menu at the top of the page to find links to hundreds of additional helpful articles.


Photo credits:  Photos were provided by David Jarmul and are used with his permission


Photo 2: Most of the volunteers in their Peace Corps group were younger than their own two sons.


Photo 3: They lived with a Moldovan host family, including their beloved Bunica, or grandmother.

Posted by Deborah-Diane at 8:30 AM