Alzheimers Research - How to Join a Study 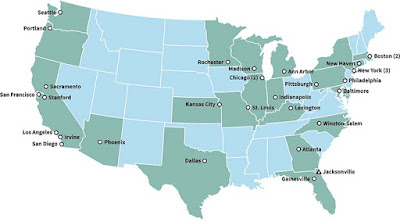 Alzheimer's Disease, the most common form of dementia in the United States, is expected to sky-rocket over the next few decades as Baby Boomers grow older.  Currently, about 5.5 million Americans are living with Alzheimer's Disease.  Over the next 30 years, that number is expected to triple to 16 million people, with approximately one-third of all Medicare dollars spent to treat this one disease alone.  If this concerns you, it is now possible to sign up to participate in a long-term research program, even if you currently have no signs of dementia.

On a personal level, I recently registered with the Alzheimer's Research Center in my area, at the University of California in Irvine.  In order to participate, I registered on their MIND website at c2c.uci.edu.  Readers who live in Orange County, California may also want to register with this Research Center.  Unfortunately, each Research Center has its own separate studies and websites. You can find more information about how to register with other centers at the National Institutes of Health website at https://www.nia.nih.gov/health/registries-and-matching-services.

To initiate my registration with UCI MIND, I completed an online questionnaire which took about 30 minutes to complete.  It asked about my family background (my mother died of Alzheimer's, but my father is alive at 90 with no signs of the dementia.)  It also asked about my health, medications I take, and my lifestyle habits, including my diet, amount of sleep I get, alcohol consumption, etc.   In addition, they wanted to know what diagnostic and treatment medications I potentially would agree to, if offered.  I was a bit uncertain about how to answer these questions, since they included whether or not I was willing to take experimental medications, get brain scans, or donate my brain to the researchers upon my death.  I did not agree to all of these things, and apparently it was not necessary to agree to them all.

The speaker who suggested that interested parties should register for the UCI MIND Alzheimer's Research Project told us that people would qualify for the early clinical trial if they met the following criteria:
I met the above criteria.  As a result, I was contacted about six months after I registered on the UCI MIND website.  I went to the offices at UCI and had an interview with one of the researchers.  During the interview, I was also given a basic cognitive test to determine whether or not I was currently showing signs of dementia.  I was not.  The researcher told me that I would be contacted periodically in the future.  I would be asked to update my online questionnaire annually so I could report changes to my health, medications or medical record.

I may also be invited back to their office occasionally to be interviewed again and given another cognitive test.  The researchers may decide at some point that I might be a good subject for more intensive study, perhaps receiving a brain scan or an experimental medication to prevent the progression of dementia.  That decision could be made at any time, or years from now.  However, it is reassuring to know that I am now part of their database and will be followed for the rest of my life.

There is also a special, separate research study at UCI MIND which is called the 90+ Study. It is for people over the age of 90 and it has been featured on the television show "60 Minutes."  Some of the subjects of this study have been participating for over 30 years. You can find a video of the "60 Minutes" segment on YouTube, as well as other videos featuring Dr. Claudia Kawas, who is the lead investigator.

Whether you ever develop dementia or not, your participation in a research study could help someone else avoid Alzheimer's Disease and other forms of dementia in the future. That makes your participation well worth the time and an excellent way to help others and, possibly, yourself.

For more information about dementia and other common health problems as we age, financial planning, Social Security, Medicare, where to retire and more, use the tabs or pull down menu at the top of the page to find links to hundreds of additional articles.