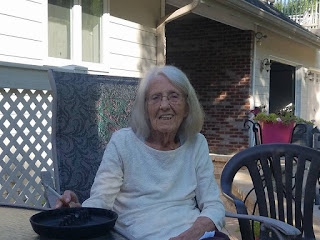 Over the past year, my husband and I have spent time with two relatives who were deep in the depths of dementia.  In both cases, their situation was tragic, although their symptoms were very different.  As a result, I thought it would be helpful for my readers to know more about the different symptoms and stages of dementia so they can be more aware of the symptoms when they begin to see them in their loved ones.

Below are two personal examples of what can happen when people get dementia, followed by the Alzheimer's Association list of the symptoms of dementia at different stages.

The Alzheimer's Disease of My Mother

In the first case, my mother's late-stage dementia reached the point where she became very suspicious and uncomfortable around people she did not see on a daily basis.  Although my mother and father lived with my sister and her husband during the last three years of my mother's life, she tended to be very unhappy during much of that time, especially whenever my sister had friends visit.

My mother is the woman in the photo above and seemed the happiest when she was only surrounded by family. She would tell other people she wanted them to leave and that she did not want them in "her" house.  In one case, she even hit a man in the face with her fist when he came to trim the hedges.  Fortunately, she was so frail that her punch was harmless, although unexpected.  Before dying from her dementia, combined with congestive heart failure, she had reached the point where she needed constant care, could no longer walk or eat on her own, and seemed unaware of her surroundings.

The Dementia of My Sister-in-Law

In the second case, my husband's older sister moved into an assisted living community a year ago when she became lost several times in the gated community where she had lived for 25 years.

She was unaware of what was happening in the world outside her community. She could not name one thing she did during the day, although her physical health was good and she was able to walk around easily. Both days we visited her, she was wearing jeans and a heavy sweater, although the temperature was nearly 90 F.  However, she was friendly and gracious.  She genuinely seemed to enjoy our visit, although she probably did not remember it after we left.  She happily showed us around her community, although she got lost walking the 100 yards from her cottage to the swimming pool.  She was very cheerful, and did not seem at all fearful or distressed to be around other people.  She realized that her memory was not very good, but laughed it off.

After these two visits, I began to wonder about the different forms dementia could take.  The information I learned from the Alzheimer's Association is listed below.  It helped me understand that my mother and sister-in-law were in different stages of their dementia.  The symptoms listed below may help other people understand what is going on with their loved ones.

One question people often have is the difference between dementia and Alzheimer's Disease.  Dementia describes a spectrum of illnesses which cause memory or thinking problems.  Alzheimer's is the most common and is thought to be responsible for approximately 70 percent of cases, but it is not the only cause of dementia.  For example, after a stroke, a patient may develop vascular dementia.  Dementia can also be a result of a variety of illnesses including Parkinson's disease, Huntington's Disease, Creutzfeldt-Jakob disease, Lewy Body, hydrocephalus, and combinations of different diseases.  It is possible for someone to have more than one type of dementia at the same time.

In order for someone to be diagnosed with dementia, they must be impaired in at least two of the following areas, according to alz.org, the website for the Alzheimer's Association:

The Alzheimer's Association website said they "may have problems with short-term memory, keeping track of a purse or wallet, paying bills, planning and preparing meals, remembering appointments or traveling out of the neighborhood."

Those symptoms were certainly true for both my mother and sister-in-law.  While both had been very capable women throughout most of their lives, dementia caused them to lose the ability to handle their finances, safely drive a car, or take care of themselves, even before their memory loss became severe.

(Many people may identify with some or all of these symptoms, which is one reason why it is so difficult to diagnose dementia in its early stages.  Someone with early stage dementia or mild cognitive impairment may never get worse, or they could be at the beginning of more severe dementia.  It is difficult to predict.)

Forgetting your own past history, address, or phone number
Becoming moody, withdrawn or frustrated
Dressing incorrectly for the season or situation
Trouble controlling bladder and/or bowels
Changing sleep patterns
Wandering and becoming lost
Personality changes such as becoming suspicious, having delusions, or exhibiting compulsive behaviors

(During this stage, my mother became suspicious and moody; my sister-in-law dressed incorrectly for the weather. Both forgot large pieces of their personal history, and became lost easily.)

The need for constant personal care
Loss of awareness of surroundings and experiences
Diminished physical abilities such as walking, sitting or even swallowing
Difficulty communicating
Lower immunity to infections such as pneumonia

(My mother was in this stage during the few months before she died. During the last few days, she could no longer swallow or communicate. My sister-in-law has not yet reached this stage, but ultimately she probably will.)

Dementia is a frightening illness and a slow, tragic way for your life to end ... unable to remember your own past or your connection to loved ones.  However, research is ongoing and there are medications which can sometimes slow down the symptoms.  If you suspect that you or a loved one could be showing signs of dementia, talk to a doctor right away.

For more information about common medical issues as we age, financial planning, where to retire, Social Security, Medicare and more, use the tabs or pull-down menu at the top of the page to find links to hundreds of additional articles.

Photo credit:  Photo taken by author; all rights reserved.
Posted by Deborah-Diane at 7:36 AM

Email ThisBlogThis!Share to TwitterShare to FacebookShare to Pinterest
Labels: causes of dementia, common symptoms of dementia, dementia symptoms, difference between dementia and Alzheimers, stages of dementia