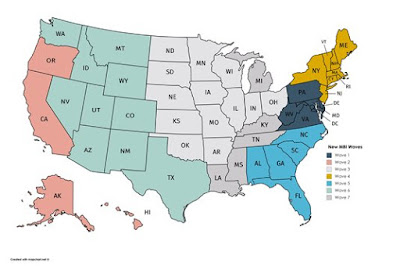 Beginning in April 2018, the federal government will start mailing out new Medicare cards to the 59 million people currently enrolled in the program.  The entire process is expected to take approximately one year, so it could be a number of months before some beneficiaries receive their cards.  The reason for the change is to remove Social Security numbers from Medicare ID cards.  This will help protect the identities of beneficiaries.

Why are Medicare Cards being Changed?

The reason for the change is simple.  When people have their wallets stolen, which often contain their Medicare card and driver's license, the information inside could easily be used to steal that person's identity.  In addition, phone scammers have preyed on the elderly by calling and asking for their Medicare number, claiming to be calling from a doctor's office or insurance company.  Because the current Medicare number has been the same as the Social Security number, this information enabled the scammers to divert Social Security payments or steal from the victims in other ways.

What Number Will Be on the New Cards?

The new Medicare cards will no longer display the person's Social Security number.  Instead, they will be assigned a new, randomly generated 11-digit Medicare number.  It will not be purely numeric.  Some capital letters will be included.  This new Medicare number will be the one used to verify that you are eligible for Medicare services.

How Long Will It Take to Get the New Card?

Because the transition is expected to take a year, either the old or new Medicare cards will continue to be accepted by doctors' offices and hospitals until December 31, 2019.  Doctors and hospitals will also be able to use your old Medicare information during the transition period or look up your Medicare number on the computer, if you do not have your card with you.

The new cards will be mailed out on a rolling basis between April 2018 and April 2019.  The map above shows how states will be grouped together during the roll-out of the new Medicare cards.

The first states to receive the cards will be Alaska, California, Delaware, the District of Columbia, Hawaii, Oregon, Pennsylvania, Virginia and West Virginia, as well as American Samoa, Guam and the Northern Mariana Islands.  Recipients in those locations should receive their cards between April and June, 2018.

The last wave of states to receive their cards will be Kentucky, Louisiana, Michigan, Mississippi, Missouri, Ohio and Tennessee, along with the territories of Puerto Rico and the U.S. Virgin Islands.

If you are one of the nearly 18 million people who have their coverage through a Medicare Advantage plan, you will continue to use the current card which the plan issued to you.  These cards do not display your Social Security number.  Instead, the private insurance companies which offer these plans use their own identifying numbers for each member.

The same is true for prescription drug plans which are part of Medicare.  They are operated by private insurance companies and use their own identifying numbers, rather than a social security number.

You do not want to destroy your Medicare Advantage and drug plan cards.

Dispose of Your Old Medicare Card

Once you receive your new Medicare card, you will want to carefully dispose of the old one.  Do not simply throw it in the trash.  Either put it through a shredder or cut it up with a pair of scissors, being especially careful to destroy the Social Security number displayed on it.

In other cases, there have been reports of scammers threatening to cancel the victim's health insurance if they don't give the caller their current Medicare card numbers.  Never give your Medicare number to a stranger on the phone.  Your physician should have your Medicare information after your first visit.  If they need additional information, call the doctor yourself or give the information to them in person.

In another scam, people have been called and told they need to pay a fee in order to get the new cards.  There is no fee for these cards.

Remember: neither the government nor your insurance carrier will call or email and ask for your social security number, address and similar information.  They will definitely never call and ask for money.  If you believe they may need updated information, you should place the call to the Social Security Administration or your insurance provider yourself.  Do NOT give out personal information to anyone who calls you.

Make Sure the Social Security Administration has your Current Address

If you move prior to receiving your new card, you need to make sure the Social Security Administration has your correct address.  You can contact them by phone or online:

If you wish to stay current with information about Medicare, Social Security, financial planning, where to retire, common medical problems and more, use the tabs or pull down menu at the top of the page to find links to hundreds of additional helpful articles.