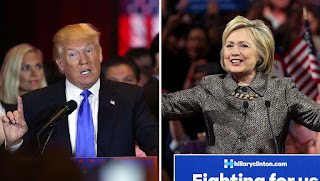 Although it has not been discussed in detail by the media, one of the major issues for senior citizens in the November, 2016 election is the future of Social Security.  Because we have repeatedly been warned that the trust funds for both Social Security and Medicare will run out of money in the coming decades, this issue is on the minds of both current retirees and those who are approaching retirement.  As a result, AARP recently requested written statements from the presumptive candidates of both major political parties to ask their plans for the future of Social Security.  The results of those statements were in the July-August 2016 issue of the AARP Bulletin.

The statements expressed in the sections below are based on direct quotes that were provided in writing to AARP by the candidates.

The intent of this article is not to sway your vote either way, but to help you make your own informed decision, based on the candidates' expressed views.  Of course, any action by the next president will need the support of Congress in order to become law.

Hillary Clinton's Plan for the Future of Social Security

*  Raise the current income cap on Social Security contributions. Currently, only the first $118,000 in income is taxed for Social Security. This means that higher income Americans will pay more than they have in the past.  Some types of income which are not currently taxed may also be included.

*  Avoid risks to Social Security by resisting efforts to privatize it.

*  Avoid adding to the burden on the middle class by resisting efforts to cut benefits or increase the percentage of taxes withheld.

*  Expand Social Security benefits to widows and people who took time out of the workforce to be caregivers for their children, elderly parents or other sick relatives.

*  Reduce the amount that Social Security decreases when a spouse dies.  This is a particularly serious issue for two successful wage-earner couples after they retire.  When one dies, the remaining household Social Security benefits for the surviving spouse can be cut in half.

Donald Trump's Plans for the Future of Social Security

*  Have an economy that is "robust and growing."

*  Repeal both the Dodd-Frank Wall Street Reform and Consumer Protection Act and the Affordable Care Act to increase competition and lower costs to consumers.

*  Reduce fraud, waste and abuse in the government, including reducing the size of the federal government.

*  Immigration reform will enable the government to save money on education, health care and public safety.  It will also increase security and lower the incidence of drug use.

*  In summary, "If we are able to sustain growth rates in GDP ..., we will be able to secure Social Security for the future."

*  After the above have been accomplished, the administration would "examine what changes might be necessary for future generations."  Mr. Trump did not specify what future changes that could include in order to secure Social Security.

Summary of Social Security Plans of Clinton and Trump

This blog has long mentioned that many experts believe minor tweaks to Social Security could make it more secure in future decades and, possibly, indefinitely.  One of these tweaks would be to increase the amount of income that is taxed by lifting the current ceiling on taxable income.  Another possibility is to raise the full retirement age by a year or two.  A final choice would be to slightly increase the Social Security tax on income.  Analysts have suggested that any one of those tweaks, or a wide variety of combinations of them, would be sufficient to secure the Social Security Trust for future generations.

Of the above possibilities, Hillary Clinton is only recommending the first one ... increasing the cap on taxable income so that more income is taxed ... but not at a higher rate.  She also is against raising the full retirement age.

Donald Trump is recommending an entirely different approach.  He believes that a strong economy will solve the problem, although he does not specify what mechanism he would use to get the additional GDP into the Social Security Trust ... through the use of a higher tax cap or an increase in the Social Security tax rate.  He only wrote that he would, "examine what changes might be necessary for future generations."

This could be a good choice for a debate question for the candidates, so voters will have more specifics about exactly how the future of Social Security will be secured.

"Trump & Clinton - Where They Stand On Social Security" AARP Bulletin/Real Possibilities July-August 2016 (written responses submitted to AARP by the candidates for president.)


If you are interested in learning more about how Social Security and Medicare work, or want to know about where to retire, common medical problems, financial planning and more, use the tabs or pull down menu at the top of the page to find links to hundreds of additional articles.

Posted by Deborah-Diane at 7:43 AM