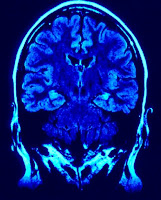 Recently, I was shocked to learn that a good friend of mine had experienced three mini strokes, also known as TIA's or Transient Ischemic Attacks, in the past four months.  When she told me what happened, she described her first TIA this way:

She was discussing a new project with her boss when, inexplicably, she realized that nothing her boss was telling her made sense, even though my friend was familiar with the project and knew she should understand what was being said.  She asked her boss to write the details down for her and then she left the room.  Although she could walk and talk, looked normal and was even able to cover up her confusion, she still realized that she couldn't understand most of what was being said to her.  She went outside and sat on a bench outside her office building.  A few minutes later, a co-worker came out to check on her and realized there was a problem.  They called an ambulance.  Her confusion gradually passed and she was feeling much better by the time she reached the hospital.  She was shocked to learn that she had experienced a mini-stroke or TIA.

Our conversation completely stunned me, especially when she told me that it has happened twice more since that first event, despite the fact that she is being treated for the condition.  This woman has a high powered job as the supervisor over a number of employees in a California state department.  She is normally assertive and comes across as self-confident and capable.  I was shocked to hear that something like this had happened to her.  I was equally surprised to hear that she was able to hide it from her superior, while she was in the middle of experiencing a TIA.  Is it possible someone else I am with in the future could experience a TIA, and I would not even recognize it?

I realized how important it is to learn the symptoms so I would recognize them, should this ever happen to me or someone I am with.

*  A TIA has similar symptoms to a major stroke, but they usually last only a few minutes and cause no permanent damage.

*   Like a major stroke, TIAs are typically caused by a build-up of plaque in your arteries which can release a blood clot that blocks the blood supply to part of your brain.  In a TIA, the blockage is temporary so the symptoms pass quickly.

*  About one-third of the people who have a TIA will eventually have a major stroke.  In about half of those cases, it will happen within a year.

*  TIAs are sometimes regarded as a warning of an impending stroke.

*  Some risk factors you cannot avoid: being over age 55, being male, being black, having sickle cell disease, or having a personal or family history of strokes or TIAs.  My friend is a 59 year old white female, so it is obvious that people who don't fit the typical "profile" can also experience a TIA.

*  Certain lifestyle choices can make you more susceptible to TIAs: smoking, heavy drinking, poor diet, lack of exercise, illegal drug use (particularly cocaine), or using birth control pills.  My friend does not smoke, drink or use illegal drugs.  She still experienced a TIA.

*  There are other risk factors that you can treat to lower your risk: high blood pressure, high cholesterol, diabetes, heart disease, peripheral artery disease, obesity, carotid artery disease, or high levels of homocysteine. My friend has lost weight, but did have a history of obesity and was pre-diabetic, both of which could have contributed to her TIA.

As you can see, almost anyone can have a mini stroke.  Even if you do not think you are at risk, you should still pay attention to any symptoms you might experience.

*  You may experience weakness or numbness on one side of your face, or in one arm or leg.

*  Your speech may be blurred or garbled.  You may also have trouble understanding what other people say.  (This was the only symptom that my friend experienced, and that was frightening enough.)

*  You may experience temporary blindness in one or both eyes, or double-vision.

*  You may feel dizzy or uncoordinated.

Remember, like my friend, you may only experience one of these symptoms.  Even if your symptoms seem mild and go away after a few minutes, it is important that you see a doctor right away in order to prevent a major stroke.

After a variety of tests to diagnose the cause of your TIA, your doctor will choose a treatment regimen for you. Below are some of the common treatment plans:

*  Anti-platelet drugs such as aspirin, Plavix or Aggrenox.

*  Anti-coagulants such as Coumadin, Warfarin or Heparin.

*  Carotid surgery to clear out the plaques.

*  Angioplasty or the insertion of a stent in your carotid artery.


For additional information, you may want to read this article from the Mayo Clinic:

For more information on retirement and aging, use the tabs or pull down menu at the top of the page to find links to hundreds of helpful articles on other health issues you could experience, financial planning, where to retire and changing family relationships.